Last week when I still was in Kiev I had an opportunity to visit Kromtech.  Kromtech is most well known for the MacKeeper product.

The CEO of Kromtech, Alexander Kernishniuk, attended on of my CSM trainings in Kiev some years ago.  And he invited me to visit their new facilities in Kiev.

Andreii Pavlenko of ScrumMaster.ua, my host while I am in Kiev, and I drove out to the Kromtech office and after some wandering finally found the office with the help of another employee of Kromtech, Nikita Rusakov.  He helped us in and find Alexander.  And surprise, Nikita was the photographer of record to make the photos that you see here.

With Alexander was Jeremiah Fowler, the Communications Director, and Eugene Kovalev, the Chief Scrum Master.  Eugene then directed us on a tour.

Before that, let me explain the sequence of getting to the tour:

First, lost in new construction and the Kiev tendency to have very obscure addresses.  Ah, found by Nikita outside.

Second, enter building obviously under construction, passed security and entered.  Lots of graffiti on the walls.  What am I getting into?

Third, opening elevator on second floor reveals not much.  Then we turn a corner and WOW! Very modern space, feeling a lot like Plug and Play in Sunnyvale.  People at computers, bean bag chairs in meeting rooms, glass walls with sticky notes all around.

Here you can see Alexander, Jerimiah, myself and Eugene in front of a wall (door actually!) and a sprint backlog.

As we toured, Eugene described what we were seeing and we discussed how it was working.

The usual supporting facilities were there: restrooms, meeting rooms, food space and some play space.  But what really struck me were the team rooms.

Each room was identified on the floor with a large number.  (I kept expecting to see the team name there as well!)   I did not see every room but it seemed that each exterior room had a big window and a glass door on the opposite wall.  Interior rooms had two glass doors at opposite ends.  All working surfaces and computers were on the sides up against the glass walls on either side of the doors or windows

The glass itself was not plain but had some kind of designs etched in.  Some walls had notes, diagrams and such in place using special pens that worked well on the glass.

The feel was very open and yet when in an office with the doors closed, it was clear that you were in your team space.  Each room could easily hold eight team members.

As we looked around, Eugene (with Alexander barely able to hold himself back) and explored how well Scrum was working and how the facilities supported that work.  As in every organization that I have known, each team was working differently in detail.  Some were doing better than others and there was obviously room for improvement.

While the support of the CEO, Alexander was clear, the work of Eugene, acting as a Scrum Coach, was instrumental in the state of agile at Kromtech.  He has guided the teams to a true agile environment using Scrum, XP and Kanban tool and techniques as needed. 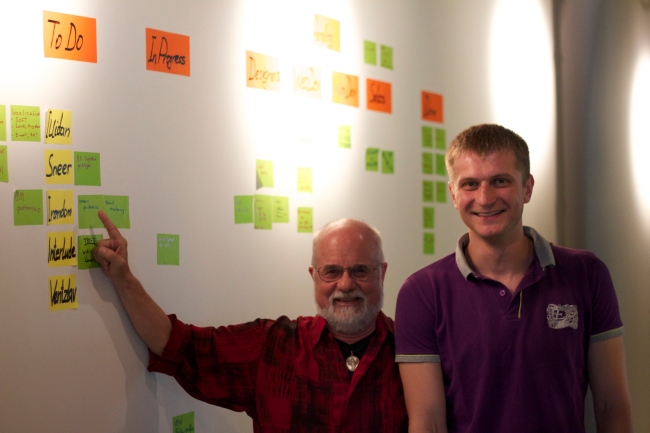 Here is Eugene and I (very staged I know!) pointing to the task board for a new team. The team was an ad hoc team that is looking a bit into future and catching cracks that are in the product planing, facilities changes, and anything else that seems to be getting dropped in the drum beat of normal backlogs and sprints.  They were acting as a scrum team as far as managing their work.

I love the idea of such a team in a organization the size here (about 200).  Someone who is keeping an eye out, filling in holes, being an emergency resource.  They are an embodiment of slack – needed in all organizations.

One last note.  The sticky notes on the walls were using some technology I have started to see in the last couple of years.  In Kiev, they are called Stattys Notes.  They use some kind of electrostatic mechanism to just stick to the wall, either the glass wall or as you can see above, a painted wall.  The move easily and do not seem to fall off. Great tool to use.  They can be ordered from Germany.

After the facilities visit, Kromtech hosted Andreii and myself to some dinner at a local pizzeria.  We drank a little beer, ate and swapped stories over a wide range of topics. Even some about Agile and Scrum.